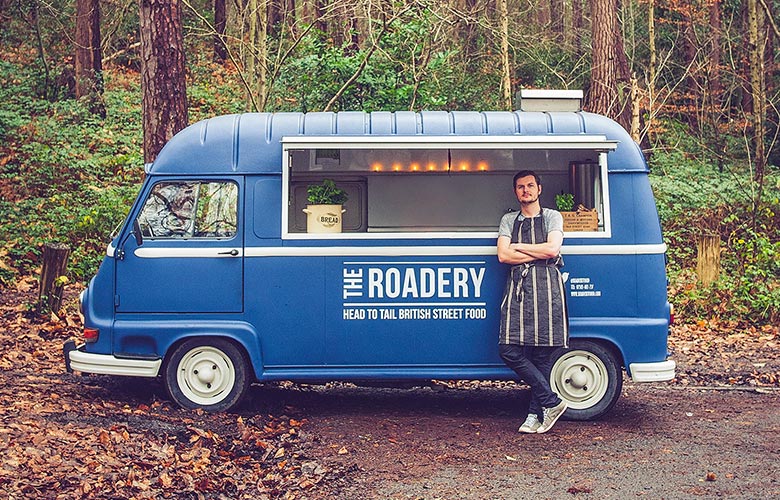 Many of Camden Market’s street food vendors rely on pimped-out converted vans to house their portable, fresh-as-you-like dishes when popping up at festivals. And frankly, these vehicles kitted out with stoves, fryers, deep freezers and grills match the first class food served out of their hatches.

It’s little wonder their owner’s treat these trusty, rainbow-bright motors like part of the family – they all have names, you know cute ones like Winnie and Pam. We’ll let the proud owners introduce you themselves…

‘She’s a fairly young baby blue Piaggio Porter,’ says Richard, who serves ice cream sandwiches out of Barbara’s hatch. ‘I bought her from an Italian family of Mr. Whippy drivers. She needed some work but only cosmetic. She’s good as gold and has never let me down.’ 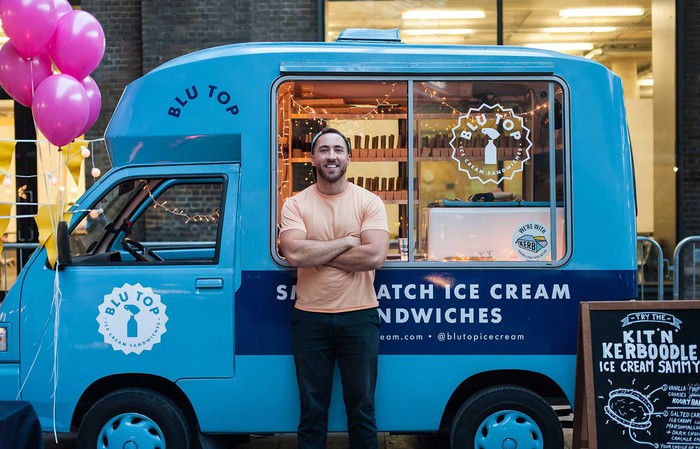 PAM THE VAN, THE ROADERY

‘Pam is a 1979 Renault Estafette and was an old workman’s van from the North of France,’ explains Dan, founder of burger dons, The Roadery. ‘She was rusting, full of holes and all alone until we saved her. She needed a lot of love but her engine purred like a kitten. Several thousand pounds later she became the beauty you see before you today. Granted, it’s a bit cosy inside, but she does us proud and turns heads whenever she goes.’ 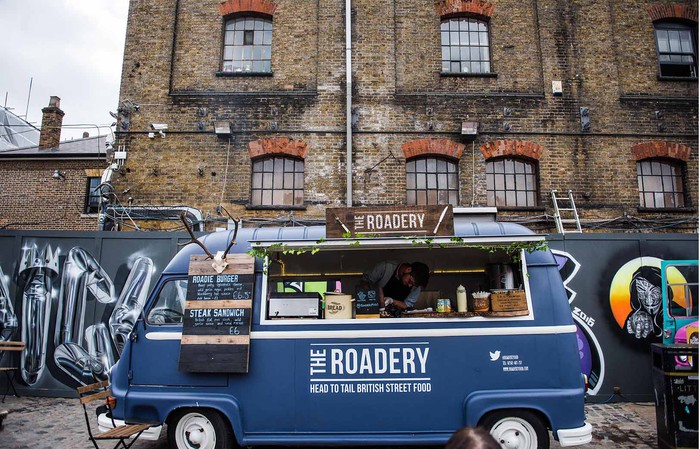 ‘Winne is an extremely rare, quintessentially British electric milk float; a 1962 Lewis Rider Pram,’ explains April, chief swirler at Moto Yogo – the only place to go for frozen yoghurt. ‘She was refurbished with sustainability in mind. In her previous life, Winnie whirred through the London streets in the wee hours of the morning, helping the milkman deliver glass bottles of milk to every doorstep. Her nostalgic good looks and her bright colours attract people of all ages.’ 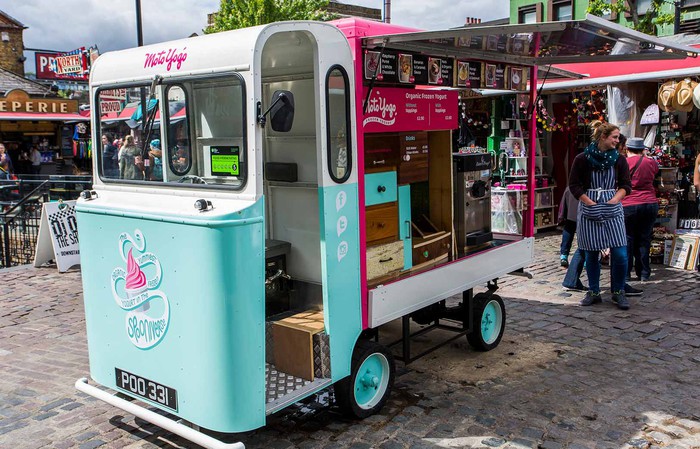 ‘Manolo was a campervan in his previous life and we had him converted. He’s a 1971 Peugeot J7,’ Rob, founder of Nazari tells us. ‘We fitted the kitchen in the back and did the full gas installation and electrics. Since getting him going we’ve done a few running repairs but he’s pretty reliable. We chose him because he has loads of character and is a bit different. You don’t see many of them around!’ Manolo serves up delicious falafel flatbreads. 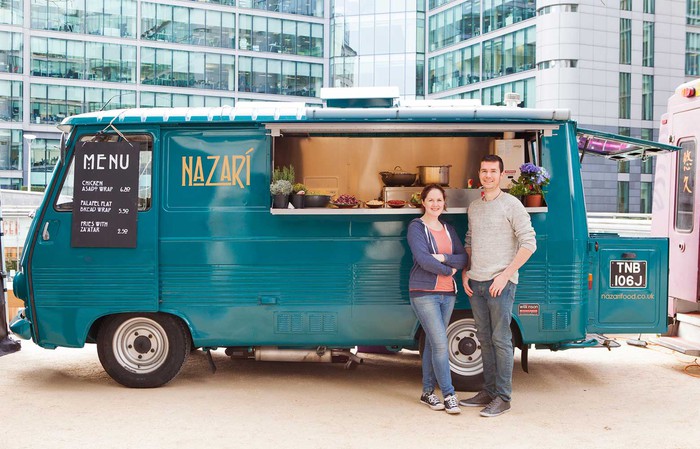 ‘After almost two years of overloading a small and smelly car I finally bought and converted a van – a very slow moving 1974 electric milk float,’ says Hanna, known for her Korean-inspired burritos. ‘She was born in the 1980s and has a racy top speed of 15mph. We found her in a milk float graveyard in Oxfordshire and redeveloped her, raising the height of the roof and adding a giant Kimchinary sign to the top from TIMC in Hackney Wick. She’s bright red, you can’t miss her.’ 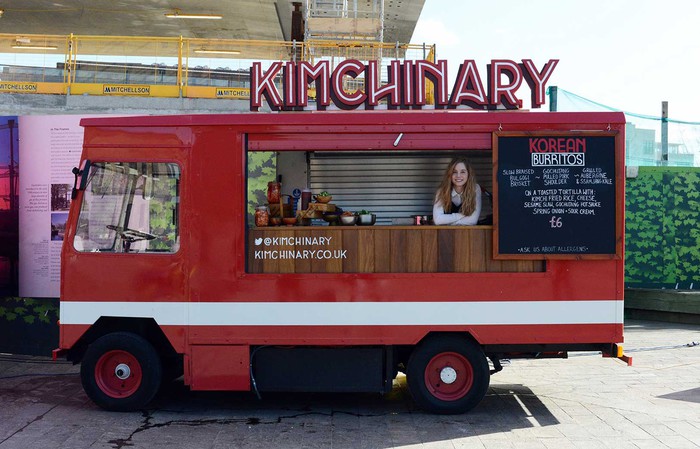 ‘My truck is called Beryl after my gran. She’s a 1971 Renault Estafette. We got her as a shell then went about contacting different companies about the refurb,’ explains Nigel, who sells noodle salads out of her hatch. ‘Choosing the colour was one of the hardest decisions to make… who knew there are so many different shades of red and white? She’s amazing.’ 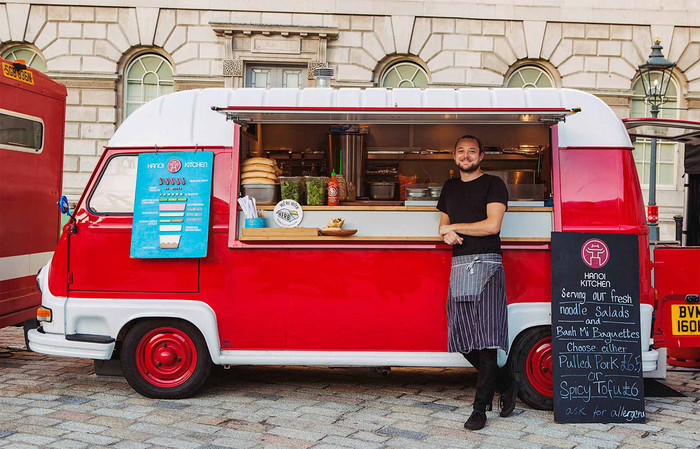