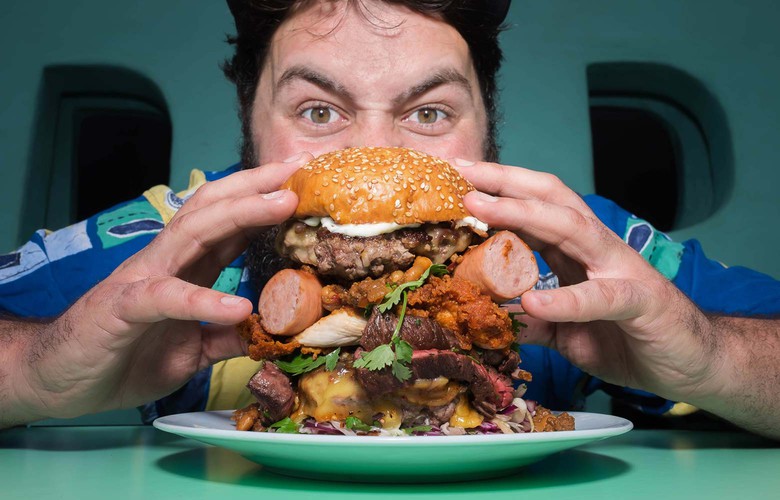 THE BEST MEAT FROM KERB CAMDEN MARKET, AS PICKED BY A REFORMED VEGGIE

There was only ever one man to do a meat edit of KERB Camden Market – and that man was Oh My Dog!’s Joel Bowen. If you don’t know him already, he sells the best hot dogs made from heritage-breed franks. He grew up a vegetarian, discovered meat in his early teens, and ate nothing but sausage for six months.

We sent him on a meat crawl of KERB Camden Market and this is what happened… Veggies, look away now. 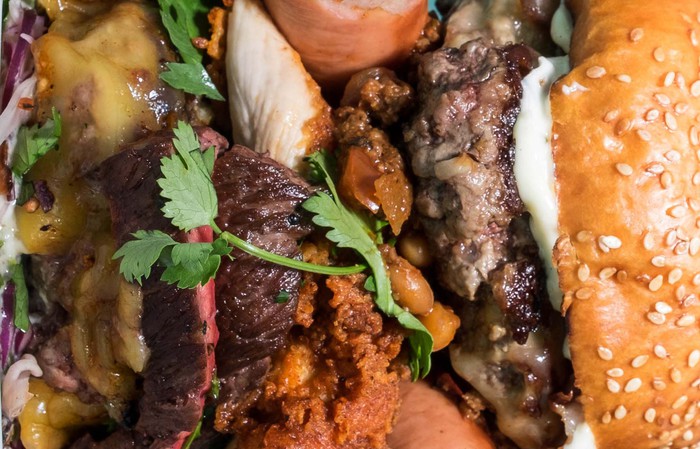 Burger & Beyond, STAKEhaus, Oh My Dog!, Mother Clucker and Louisiana Chilli Shack were involved in the making of this epic burger

Then we challenged him to pick his favourites. ‘Argh it’s really difficult because they’re all so good. You’re basically asking me to pick my favourite child right now.’

Well we made him do it anyway.

‘Their 90-day aged beef is ridiculously good. It’s a f**king tasty burger. All of it is great: the sauce, the meat, the bun. I could eat one at any time. Like right now. Part of the reason the meat is so delicious is because they own their own farm and rear all their animals resulting in awesome quality, high welfare beef.’

‘This is the juiciest chicken I’ve ever eaten. The portions are massive – always a winner! – and the hot sauce is banging. It’s how all fried chicken should be: super crispy and juicy (because the breast is brined in tea). Mother Clucker is probably the reason I’ve put on a few stone since I started KERB.’

‘I’m a big fan of The Crispy Baboy at BBQ Dreamz. It’s a Filipino dish made from crispy, fragrant pork belly and everything about it is great: the green sauce and the rice is perfect. Nice Asian flavours that people might not have tried before. I think I’m dreaming when I eat it!’

‘We’ve already mentioned Southern fried chicken but you can never have too much, right? Other Side is quite new on the scene. They do a chicken burger that’s slathered in smoked honey butter, with pickles and slaw. It’s one of the best things I’ve ever tasted and the first thing I wanted when I arrived here today.’

‘Insanely tasty beef rendang curry served with rice, veg, peanut sauce and achar. It’s sweet and coconutty and so addictive! The founder, Maria is our street food mum. She’s always giving me rendang to help fill out this shirt.’

‘I’m obsessed with the Pork Chop Rice which is deep fried pork with sweet potato flower, steamed rice, pickled mustard greens, a marinated egg, stirfried veg and stewed pork sauce. Everything about the dish complements it. It’s Taiwanese, another cuisine we’re not so used too. Everyone should eat it because it’s amazing.’

Find all these street food sellers and more at KERB Camden Market. For more info and where to find them, click here.