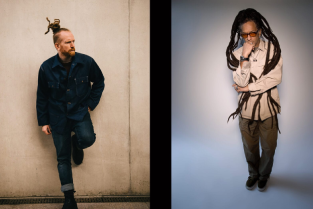 REGISTER FOR YOUR FREE TICKET HERE

Newton Faulkner has never released the same album twice. Continually adjusting to a music landscape dominated by flux, ties moved from the phenomenal success of his debut album Hand Built By Robots to the surging triumph of 'Write It On Your Skin: from Studio Zoo - written, recorded, and released in five weeks - to the sumptuous Human Love Last years Best Of compilation, however, seemed to trigger something within the songwriter.

"I wanted to do something slightly different, and used the Best Of as an opportunity to draw a line in the sand' he says. 1 was really vocal that I was going to do new stuff which would be different. Which put a lot of pressure on me! New tracks I Can Pretend' Sinking Sand and 'Together' spearhead his new project. Currently named 'Chapter One', this new work gives us a clear indication that this line in the sand is indeed, a new chapter in the life of this productive and multi-talented musician.

Working from his home studio in East London, Newton has been twisting ideas inside out. pushing himself further and further and further. "I'm not very precious any mare." he remarks. "The music is a bit chunkier, it's definitely way heavier and much less acoustic than previously. I feel like the stuff I've written recently is simpler, but it's tasteful.. it works as songs. I can feel it" 'It's grizzly, soulful, and a step furTher,' he says of his new material.

There is definitely new music set to be released across the course of 2020 and 2021 and what is becoming evident, is that Newton Faulkner is at his most daring, and also his most familiar. He's embraced shifts in the way music is forged and released, but only to get closer to the figure fans truly love. "I don't think things get better or worse. They just change he remarks. "I've kind of purposefully steered away from any of the cliques that have appeared around me. I've just remained this weird, solitary figure. 1 love it!" A huge part of what Newton does is on stage. connecting with his audiences. He hopes to get out and perform the new songs during 2020 but it's 2021 now that will see Newton lighting up stages all over the country.

Don Letts’ reputation has been firmly established in both the film and music world by a substantial body of work from the late 70's through the 80's, 90’s and well into the millennium.

He came to notoriety in the late 70's as the DJ that single handedly turned a whole generation of punks onto reggae.