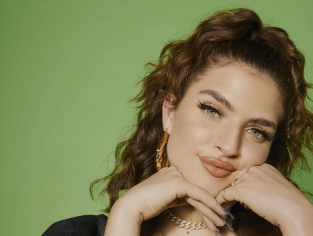 REGISTER FOR YOUR FREE TICKET HERE

Superlatives come easy when you first come across newcomer Mae Muller. Whether you’ve just tuned in to her songs for the first time or you bump into her on the street, there’s something as familiar or relatable as a warm cup of tea on a cold day. It’s partly down to the honest braziness you first come across when you hear Muller’s lyrics, coupled with the fact she sings exactly what’s on her mind. It’s also down to the fact she’s got a raw, passionate message to get off her chest with some of the best storytelling in town.

Muller is still only 21, but she describes herself as a “late bloomer,” having only penned her first song two years ago. That track, “Close”, remains on her SoundCloud to this day, a symbol of where she has come from and a reminder of the raw emotion she puts into each of her relatable pop bangers. Putting that song online, alongside short Rihanna and Frank Ocean covers on Instagram, helped Londoner Mae get her first music industry attention. Fast forward through a whirlwind 18-month period and she’s released two EPs (After Hours & then Frankly) and has formed the sound of a versatile young artist who speaks directly to and for her generation. Take “Side Piece”, for example from recent EP Frankly, which is a louche slow-jam inspired by a subject many shy away from: female sexual empowerment. “It's me saying that being intimate with someone is not always a big, emotional thing,” Mae says. “A lot of woman just want to have a good time.”

It mirrors a similar sentiment Muller put under her microscope on “Jenny” from her first EP, After Hours. This time she talks-up about female unity in the face of a man’s dishonesty. “Everyone has an experience of being fucked over by a guy,” Mae says of the songs origins. “I wanted to personify that and make it funny. It's easy to demonize the other woman. I want to deal with the real problem; the man.” On the flipside, you also find a counterpoint to her writing in the stripped-back song “Maybe”, where she lets fans go behind the scenes, singing: “Baby I put on a front but I’m cravin’ your touch.” It’s a song Mae admits is her chance “to show I have a heart” and that “I don't always have the answers but writing music gives me the answers I need. The hardest things to write about often end up being the best songs.” Music for Mae begun when growing up in Kentish Town, North London, where it was always a part of her life but not necessarily as a career path.

“The music was something I was always interested in and loved, but I didn't go to music school or anything. I did it for fun. I've always enjoyed creative writing, but I only started writing song 18 months ago.” she recalls of her younger days. In fact, working behind her local bar convinced her to pursue music further. “I had a few shitty jobs and worked in a pub. When I was at the pub I kept thinking, 'I don't know what I'm doing.' I uploaded a song that I'd written to Soundcloud and that is when it all started. It was very quick.” Those early days remain a constant influence though: “North London shaped me as a person and as an artist. Every time I feel my accent slipping I have to cut it out immediately.” Mae admits that her lack of experience writing songs worried her when it came time to working on her EP, explaining “There was nobody to tell me I was crap before, so I thought I was fabulous.” However, she took to life in the studio with ease and now works through her feelings by penning lyrics. “I use music as a way of protecting myself,” she says, listing H.E.R, Lily Allen and Julia Michaels as influences. “It's my weapon. If I'm feeling down I won't write a sad song, I'll write a bad bitch thing like, 'I'm going to fuck your life up.' It's my way of feeling strong.”

Still in a formative period of her career, Mae has been in the studio with producers including Two Inch Punch, Mark Ralph, and Fred Ball. Between them, the producers have had recent cuts with Beyoncé, Jay-Z, Years & Years, Clean Bandit, Kali Uchis, and Rex Orange County. Understandably, this can make people wary that they might end up between her lyrical cross-hairs. They need not worry though. "I'm not @-ing you”, she insists. “It's just music and my emotions." As both an artist discovered on social media and simply a young woman in 2018, Mae admits she is “addicted” to her phone. Her relationship with Instagram is a complicated one though. “I don't think I'd be where I am without it”, she concedes. “But then it puts a crazy amount of pressure on you. It's always there to look at and everyone is having the best time and has the best body. It's impossible not to compare yourself constantly.” Though many of her most memorable lyrics are an emoji away from being the perfect Instagram caption, Mae also wants her music to act as a reminder to fans that online life is not reality. “I want women and young girls going through hard shit to put on my songs and feel better”, she says. “We're going through this together. Don't worry about anyone else and have fun with life.” Speaking of pressure, Mae lists Brit Awards, Grammys, and a world tour on her slate of dream achievements. "I want to do it all”, she laughs, before returning to her trademark confident tone and stating, “I've got all the ingredients to win. Now it's up to me." All things considered, it’s a statement that is hard to disagree with.