MEET THE CHEF PUTTING THE STAR INTO STREET FOOD

Pascal Aussignac, founder of Club Gascon, knows a lot about duck. So much so, that as well as serving up Michelin Star food in London’s favourite French restaurant, he also heads up Duck N’ Roll, a street food brand which solely serves the quacking bird. His signature minced duck confit burger, a London first, is served with French flair in a squishy brioche bun with spicy Basque sauce, sweet onions and crunchy lettuce. 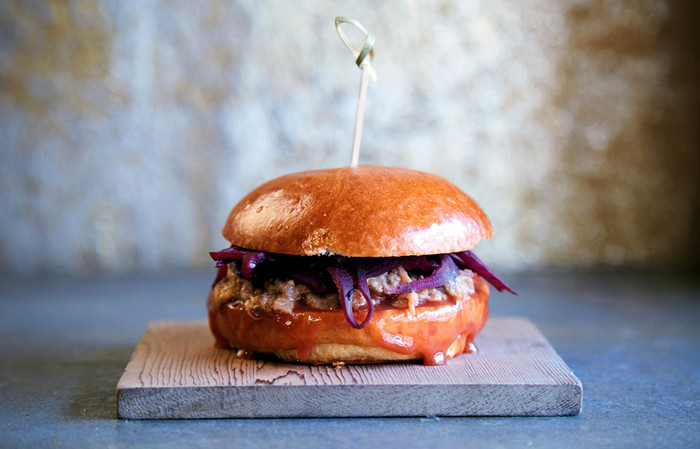 Talk us through the concept for Duck N’ Roll.

The idea was to take a classic recipe that people know, such as the Reuben sandwich from NYC, then add duck – a luxury French ingredient – into the mix.

What is it about duck?

Club Gascon is all about the South West of France, with food cooked using a selection of the best produce from the area. In this region, duck is king – duck fat, foie gras, breast.

Why did you go from fine dining to street food?

The idea came to us 11 years ago when we were at restaurant festival, Taste of London. We were catering for thousands of people, and they had to be able to eat the food standing up, so we had to re-think our menu. We opened a concept called Croque Gascon in Westfield – it was a fast food restaurant that specialised in duck. We came naturally into street food after that.

How did you earn your Michelin star?

I’ve no clue. I believe the two keys things in food are quality and consistency; and you need to deliver a message, that’s very important. We’ve had a Michelin star for 15 years. We’re waiting to hear on Monday whether we’ve got one for another year.

We’re using the same produce I use at Club Gascon, and the chefs are trained in my bistro – all the food is prepared there too. So Duck N’ Roll is totally linked to Club Gascon. I also like that it’s unexpected – you don’t expect to have a Michelin star haute couture burger.

Do you think street food will ever get stars?

In Singapore, Michelin have created the first guide for this part of the world and they’ve given a place in the street a star, so its evolving.

What’s your favourite dish from the menu?

Our signature dish, the duck burger with duck fat fries. The burger patty is made from duck, which is unique to us – right now it’s the only duck burger in London.

For more info about Duck N’ Roll and where to find them, click here.