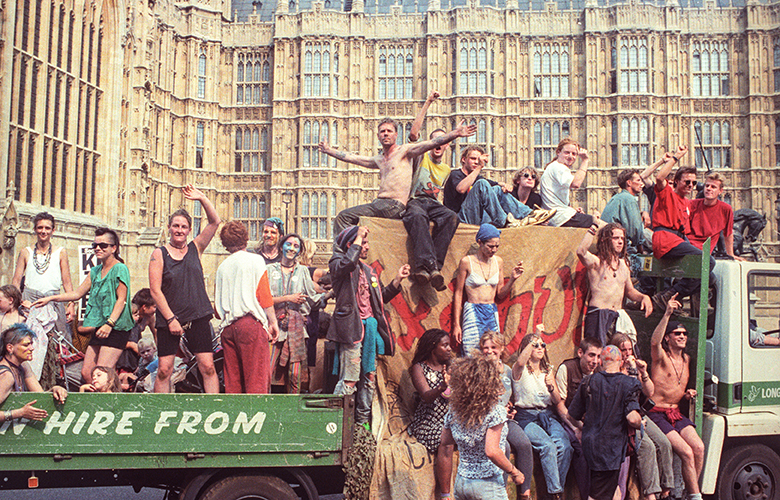 Find out more about three photographers who weren’t just voyeurs of their respective movements but were actually a part of it as well
and are featured in YOUTH CLUB‘s exhibiton. We asked Giles Moberly, Molly Macindoe and Normski the same five questions about how they got into photography and their experience on shoot.

How did you first start photographing youth culture?

Giles: My first camera was the passport photo booths in railway stations which I’d use to document my many hairstyles and the different
stencils on my leather jackets when I was a punk in the early eighties.

Normski: I started taking photographs as a hobby when I was very young and got a 35mm Zorki Range Finder camera in my early teens.
Already into music and playing the drums in a group with my friends, I quickly became hooked and started taking photographs of
inanimate things: landscapes, surfaces and objects before moving on to people (mostly my friends) when we were all young teenagers.
This was not long before the mid-80s, when I really started to get into the Hip Hop scene that was flourishing in London.

Molly: I was convinced into going by two friends at school who had recently discovered squat parties and wanted to share their excitement; they figured I was alternative enough to appreciate it. I wasn’t into dance music when I went to my first rave. What I was looking for was a place and a community that I would feel comfortable in. Upon entering my first free party at the old Bingo Hall in Wood Green, North London in 1997, I found exactly that. When I walked through the front door it was chaotic, noisy, intimidating, lawless, hedonistic and exciting; Instantly I felt I was exactly where I was supposed to be. I soon fell in love with this new world of uniqueness and individuality, unconventional beauty that comes from honest self-expression and the abandonment of ego; a rare freedom.

Having just started learning Black & White printing in school, I brought my Pentax MX camera to my second party and the combined love for photography and this new community grew from there. I knew early on that I wanted to make a book one day that celebrated rather than demonised the scene. Each weekend I met more people – especially after showing them prints – became affiliated with sound systems. This lead to creating old school slide projection shows: this new, ever- expanding community became my best friends and still are to this day.

How have you seen the youth culture you have documented evolve?

G: The youth culture back in the day has assimilated into mainstream society. You see a lot of grannies with coloured hair and kids with
mohicans working in coffee shops, that just didn’t happen thirty years ago.

N: Much of what was going in the 80s with inner-city youth is considered the ‘Golden Age’: a time of unchartered territory and new
beginnings. Looking around now, I’m really reminded me of those days, but with more technology. Where there might have only been a
few signed artists able to scrape together a living or a career from their chosen interests — be it music, art or culture — today it seems
that these scenes are busier and more upwardly mobile.

M: From a broad perspective the essentials have not actually changed that much. I’m not one to mournfully reminisce about the good ol’ days being gone. As laws, governments and national financial situations change, so does the scene and how it is organised. The phrase ‘mutate to survive’ which is also the name of a techno record label, springs to mind as this is what has had to happen, not just because of new laws but also creatively. Out of Order covers ten years but I’ve been documenting raves for longer and of course the free party culture has existed for more like three decades so far. The scene is ever-evolving and endlessly creative and resourceful: one of its best qualities. This evolutionary persistence sets the free party scene apart from other youth subcultures, making it a definitive subculture and way of life for many– not just a youth fashion. 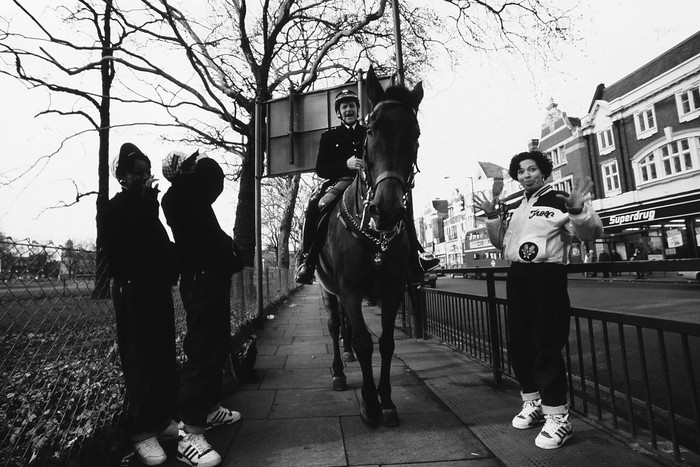 What do you think people should take away from the exhibition message ‘Unite & Take Over’?

N.:I really hope people can get a good feeling from some of the movements that have cemented themselves in the history of youth
culture. People should celebrate the importance of free spirited and historical actions that have shown that young people have a voice
that should be taken notice of.
Your favourite piece of kit?

N.: My favourite piece is still my 30 year old Olympus OM2 35mm Brass body SLR and all of the original lenses that still work to this day.
Most of my photographs that are featured in the Youth Club archive have been taken using this camera.

Finally, a standout moment from one of your shoots.

G.: There have been so many exciting incidents, many whilst working in Nigeria, where there was a fishing festival in the north-west.
Thousands of half-naked men were charging into a river, holding nets and looking for the largest fish — it looked like something out of the
Bible.

N.: Having work in the permanent archive of the Victoria & Albert museum of black British culture that includes portraits of my mother
and stepfather, a black policeman when there were very few in London and four different images that represent identity, sexuality and
street style from the UK’s hip hop golden age is a very special thing for my work to have achieved.

M: From a personal viewpoint, this is a memory of an important moment for me. It was late-morning and I was at a large-scale free party in a multi-storey building on Commercial Road, wandering through the place, up and down stairs, in and out of rooms, not quite ready to leave the last remnants of the night. I kept bumping into the same person doing the same thing. We joked “have you found anything interesting yet” then struck up a conversation about photography and the ethics involved in documenting an underground secretive scene as I was still snapping and talking (this was 2000 – when cameras were still a big no-no). He told me the best photo of a free party he’d ever seen was on the middle image on an E.P record released by Crossbones (a free party soundsystem) a couple of years previous. The phrase ‘tickled pink’ probably applied to me then as the image in question was mine and was not only my first ever publication but the first party building that I had taken my camera to. This conversation was much needed encouragement to my shy younger self, who had a dream of doing a book one day but didn’t know how. Significantly, I punctured the conversation to snap a scene in front of us when a Dalmatian wandered into the room and it turned out that this very shot is still today, if I had to choose, my personal favourite of them all. 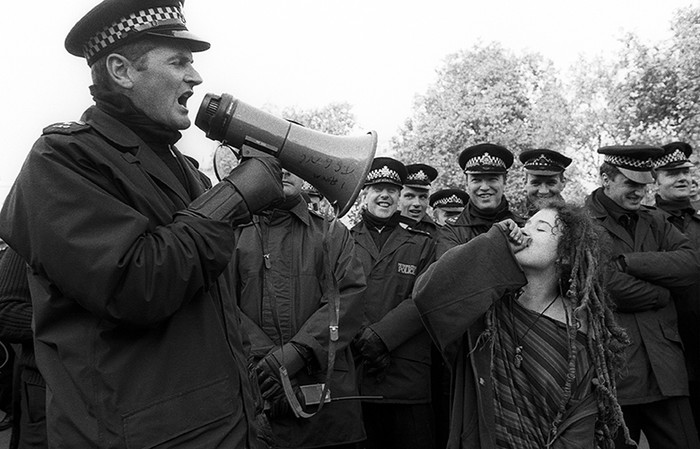