PROBABLY THE BEST CHICKEN SANDWICH IN THE WORLD

When reviews include ‘so ridiculously good it’ll leave a tear in your eye and a hole in your heart when it’s gone’, you know your award-winning dinner’s going to be good.

Inspired by the popularity of the chicken sandwich in the USA, poultry power couple Garrett and Emer Fitzgerald have created a serious British contender. Even better, they’re selling it at their newest outpost on Camden Lock Place. These two know how to treat a bird right: all chickens are slow-reared, higher welfare, free range, marinated in buttermilk overnight and deep fried to crunchy, golden perfection – before becoming one of their many menu items named after a TV character. Take Clancy Wiggum. He’s topped with streaky bacon, smoked chilli mayo and guac. Not your average chicken sandwich, eh?

We find out more from founder and exec chef, Garrett. 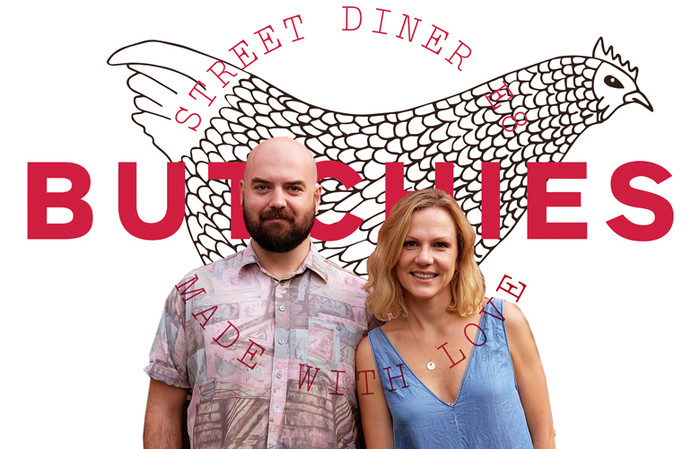 What made you decide you loved fried chicken so much you’d quit your day job?

I was a vegetarian for eight years. During those eight years I always had cravings for fried chicken, despite not particularly liking it that much before becoming a veggie. It was when myself and Emer spent some time in New York and I discovered real fried chicken at a little spot called Sylvia’s in Harlem. I broke, and indulged. A year later and after many months of perfecting a recipe, we opened Butchies in Broadway Market. We didn’t expect it to get so popular. Once it did, I didn’t really have any option but to pack in the day job. It was a glorious day.

Why is your fried chicken sandwich the best in the world?

I think it’s because of the quality of the ingredients we use and the years we’ve spent perfecting the recipe. We use only free range higher welfare birds that have been slow-reared. We marinate it for at least 12 hours in buttermilk. We also pressure fry our birds which seals in the chicken’s natural juices whilst ensuring a crisp crunchy coating and tender juicy meat.

Why is the chicken sandwich better than the beef burger?

Chicken is healthier than beef and for me personally, nothing bores me more these days than the thought of eating another beef burger.

For me it has to be David Chang’s Fried Chicken in Momofuku Noodle Bar. It’s insane. You need to book in advance and it feeds four to eight people, so arrive hungry!

Any other underrated American dishes we should get into over here?

It’s technically Italian-American, but some of the fried eggplant parm sandwich’s knocking about New York are next level.

How many fried chicken sandwiches have you eaten this year?

About 65 (purely for research purposes, of course).

For more info about Butchies and where to find them, click here.