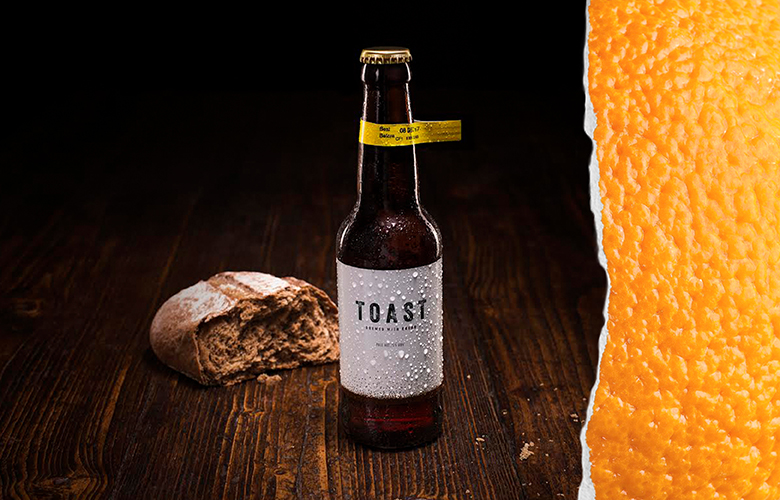 ORANGE PEEL AND BREAD? THEY MAY NOT BE THE MOST LIKELY BEDFELLOWS FOR A BOTTLE OF THE COLD STUFF, BUT BOUTIQUE BREWERY TOAST MAKES THEM WORK…

Being a bakery and all, it totally makes sense that Flour Station stock a beer made by Toast from unused loaves. However, with their new, limited edition Orange Weiss beer, Toast are coming full circle, not only selling their beer in the Market but now also making it with ingredients found here, namely the leftover peel from Camden Lock’s famous orange juice stand.

So, what’s the deal with bread being made into beer?

Head toaster Rob Wilson was working at Ashoka, a global organisation that looks to identify and scale innovative solutions to environmental problems. This was where he met Tristram Stuart, a changemaker within the network as well a social entrepreneur and pioneer in the fight against food waste. The two got talking about the largest contributor to food waste: bread, 44% of which is thrown away, the equivalent to a million tonnes of bread in the UK alone.

They came up with an idea, a plan to get wasted on waste – replacing a third of the malt used to create traditional beer with fresh, leftover bread. All of their profits go to charity Feedback, an environmental charity that campaigns to end food waste.

And now you are also using orange peel  for a special new Weiss beer, why oranges and why their peel?

Our recent Weiss beer was the inspiration of Vanesa, head brewer at Temple Brew House, London’s most central brew pub. This is the 5th Toast collaboration she has brewed and the first Weiss Toast beer based on the Belgian tradition of using flavourings such as coriander and orange peel.

It just made sense to try and source discarded peel from juiced oranges for this brew and our friends at The Flour Station – who donated their surplus bread for this and other brews said there was a great juice stall on the market we should talk to. It was a very special brew for us – we were joined by 16 crowdfunder supporters who donated money for beer and for the experience of helping brew that batch on Saturday 13th May.

How much peel do you use and how long does it take?

Billy & Darunee from the juice stall handed over two  heavy boxes of their freshly squeezed orange peel in exchange for a couple of bottles of our beer. The crowdfunders grated it and added it into the brew which provides a great, unique flavour. The bread replaces 1/3 of the malt in a beer and this means that there is approximately one slice per bottle. Bread, like malt contains sugars which are fermented into beer.

We don’t yet know! The beer will be on tap any day now. We can’t wait and hope to share a pint once it’s available. Wanna join us?!