To meet Cyberdog’s co-founders Spiros and Terry, you’d never guess they were cybergoth superstars who live in a space pod next to the Regent’s Canal. But with locations in Camden, Brighton and Ibiza, their clubwear megabrand is the world’s favourite for ravers, new-agers, fetishists and cyberpunks alike. And their story started in Camden Market…

Where did the idea for Cyberdog come from?

We were regular clubbers at the start of the rave scene and couldn’t find clothes that matched this new music. The name came from our pet Chihuahua, who looked like an alien! We started from a small stall in Camden Market 24 years ago and we’ve grown, and remained here, ever since. We knew we wanted to create a shop that felt like a club, and make it exciting as an alternative to the boring shops of the time. We wanted people to feel as happy as we did in the clubs. 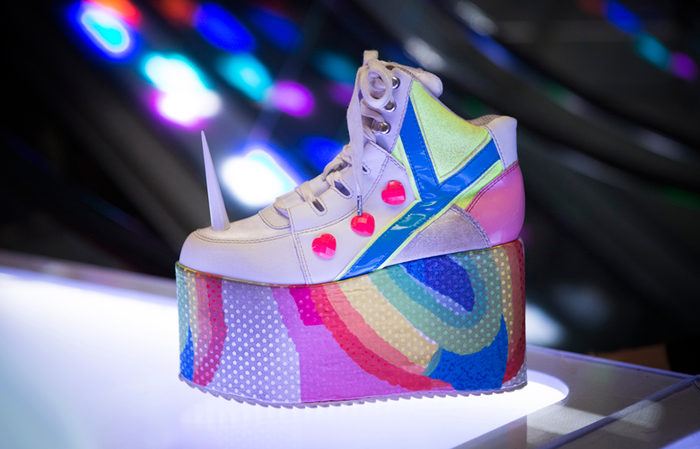 Cyberdog was born in the 90s – what about that decade influenced the brand?

The 90s was the height of the UK’s rave explosion, so it wasn’t the decade so much as the scene that influenced the brand. These new clubs were lit by neon backdrops, and we wanted to glow as well, so we started to design clothing using neon colours that weren’t available back then. The high street at that time was full of retro stuff, so not finding clothes for ourselves to wear clubbing was what drove us to start. We then started experimenting with the darker fetish club clothing, which were all black at the time. We added flashes of neon colour – this is how the term ‘cybergoth’ came about.

Terry, do you still design all the clothes?

Yes, I design clothes for different subcultures with an emphasis on celebrating individuality. I’m a lover of science and technology so I try to incorporate this into the clothing wherever possible. All our clothes are still made in London, which is something we’re extremely proud of. Our factory and production is in East London, and lots of our staff there have been with us for many, many years so we’re like one big family.

Your shop floor staff are some of the UK’s most dedicated cybergoths. What does it take to get a job at one of your stores?

The shop is an exciting and fun place to work, so it attracts people who want to experience that. Our staff are from various cultures and styles: clubbers, unicorn lovers, cybergoths and everything in between. We’re looking for people who are passionate about self-expression – that’s our only criteria.

Yes, we’re working on a collaboration with Opening Ceremony but it’s still in the early stages of development at the moment. We’ve also recently supplied costumes for three high profile films, all will be released next year. We’re also collaborating with some clubs and festivals both here in the UK and in Ibiza.

Speaking of Ibiza: your home, Villa Cybaura, is like a luxury incarnation of the shop and has been named one of the top six rental properties in Ibiza. Is it like a five-star for grown up cybergoths?

We’ve been going to Ibiza for over 25 years, and because of its strong club scene, it holds a special place in our hearts. We have two shops on the Island, one in Ibiza Town and one in San Antonio. Our home has many Cyberdog-style decorative touches and every year we take our managers and back office staff there for a busman’s holiday.

For more info about Cyberdog and where to find them, click here.