16-YEAR-OLD CARYS SELVEY ON HOW TO MAKE IT IN MUSIC – BE AMONGST THE FIRST TO SEE HER PERFORM, LIVE RIGHT HERE IN CAMDEN

Commit Carys Selvey’s name to memory, because this talented 16-year-old is on track for stardom. The English singer/songwriter may still be a teenager, but she’s been honing her music writing skills for a decade. Remarkably, she penned her first song aged six, and is also an accomplished piano, guitar and ukulele player. What’s more, for the last two years, Carys has been working under the guidance of Sony – the music giant signed her when she was just 14, describing her sound as ‘acoustic, organic pop’.

If you want to experience her skills first hand, get yourself down to Coffee House Sessions in Camden Market’s Accepted Rebellion for a free gig on Saturday 6 August. In the meantime, we get to know the artist in her own words… 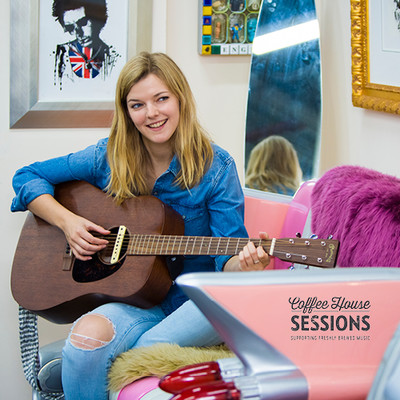 Growing up, did you always want to be a musician?

Yes, music was always something I was really drawn to. I didn’t think too much about it, it all just came very naturally, and I’ve never really seen myself doing anything different.

You wrote your first song when you were 6 years old. What’s the story?

It was actually a song for England’s football team in the 2006 World Cup. My family had a bunch of friends over to watch England’s first match of the tournament, and I’d recently started learning guitar. I felt inspired by the atmosphere and decided it would be a good idea to write a song that day, so I did.

How has your life changed since signing to Sony ATV?

My day to day life hasn’t changed dramatically, but I’ve learnt so much about the music industry and it has enabled me to write with some really talented people that I really respect and connect with. I feel so grateful for that.

Who are your musical inspirations?

I’m a really big Ed Sheeran fan, so I would definitely love to work with him one day. If I ever make it big enough, Swedish songwriter and record producer Max Martin [who’s worked on major hits for artists such as Britney Spears, Katy Perry and Taylor Swift] would be an amazing person to work with, but that would be a long way in the future!

What advice would you give to an aspiring artist looking to get signed?

Just write and perform as much as possible, and get your name out there. I’ve found my performance has grown each time I play to a new audience. Also, make sure you really love what you’re doing and that you’re willing to give it your all.

Carys Selvey is performing live at Accepted Rebellion on 6 August. For more info and to attend the event, click here.