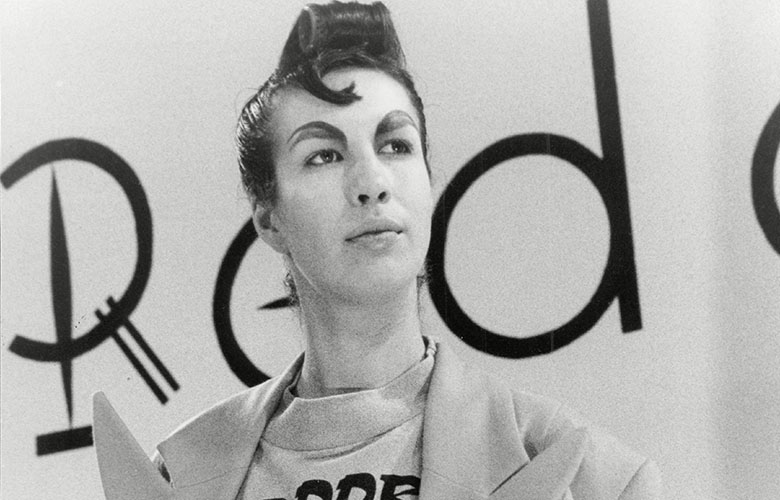 Camden Market has had a firm hand in fashion history since the 1970s. The links between fashion and music have, and always will be inextricable – and back in the 70s, Camden was a melting pot of both. Dingwalls Dance Hall was alive and kicking and in those days, fashion was influenced by music… not catwalks. With this in mind, Camden Town was right at the very centre of London’s gig scene.

The first of Camden’s markets, Camden Lock started in 1974 as an arts and crafts market outside Dingwalls Dance Hall. Its popularity quickly grew, with Camden Market becoming the place to go if you were looking for something ‘alternative’. British subcultures defined by music were burgeoning: mods, rockers, punks, bohemians – everybody who was ‘cool’ was down at Camden Market on a Sunday afternoon buying their hippy flares, leather jackets, cheese cloth smocks, ripped Levi’s, slogan tees, platform boots and battered old Dr Martens.

Camden Market acted as a launch pad for many young designers. The flexibility of a market stall and the eclectic mix of visitors attracted to Camden Market every weekend made ideal conditions in which to start a fledging fashion business. By the mid-80s, The Daily Express had named Camden Lock ‘London’s trendiest Sunday hang-out’ stating that ‘many of Britain’s top designers started out with stalls here’. Eine Kleine, English Eccentrics and BodyMap are just a few of the brands that were dominating the London fashion scene in the 80s, not long after they had started out with nothing but a single stall in Camden Market.

Wayne and Gerardine Hemingway were amongst the first young entrepreneurs to see an opportunity for a small retail business in Camden Market. Initially the duo were selling vintage clothes and second-hand shoes such as old Dr Martens. Wayne recalls that ‘beat-up Levi 501s and Dr Martens was a very Camden look’ which made their selection of clothing and footwear extremely fashionable amongst customers. A couple of years later Wayne and Gerardine launched their own footwear label, Red or Dead. The brand won the British Fashion Council’s first ‘Street Style Designer of the Year Award’ and very soon Red or Dead stores were opened in Camden, Soho and Covent Garden.

That legacy still lives on today, with traders catering to the mod, rocker, punk, retro and bohemian scene still very popular in Britain. 1940s and 50s inspired clothing label, Collectif started out 15 years ago with a stall in Camden Market. It’s now a well established brand with several boutiques across London. Modfather’s store is a mandatory stop for the likes of Paul Weller and the Gallagher brothers. General Eyewear’s vintage glasses can be seen on catwalks and in films, most recently on Eddie Redmayne in the Theory of Everything and on Johnny Depp in Charlie and the Chocolate Factory.

And in some ways, not much has changed. Now, even though it’s over 40 years later, Camden Market is still the place to go if you want to get your hands on a battered pair of Dr Martens.