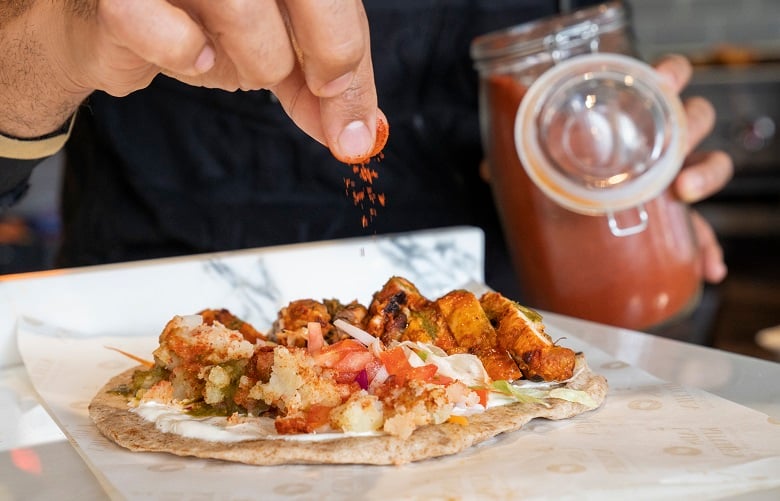 2 Lads Kitchen was created by two friends, both in the restaurant industry, who realised that nowhere in London was selling good-quality, traditional Afghan food. Knowing the cuisine was too delicious to keep to themselves, they set about developing a menu of Afghan classics, marinated meats, zingy sauces and soft breads that are now on offer seven days a week in Camden Market Hawley Wharf.

The barbecued meats are a hero of the menu here, with 24-hour marinated chicken thigh or lamb, grilled over charcoal for a moreish, smoky flavour and tender texture. The fresh salads served on the side are crunchy, colourful and zingy, and the green secret sauce (they still won’t tell us what’s in it!) is an explosion of herby flavour.

Every element of 2 Lads Kitchen’s food is created with care and attention, from the slow-steamed rice to the afghan wraps, which are stuffed full of marinated meats, salads, sauces and boiled potatoes and encased in a homemade naan.

Make sure you try…

The Mantu – A plate of seven Afghan dumplings shaped like a half moon, steamed with a spiced lamb or veggie leek filling, served on a bed of dahl with black pepper yogurt and secret sauce